Esther is one of those books of the Bible you probably don’t read that often.  If that’s true, it’s a shame.  Esther is perhaps the most entertaining, self-contained stories in the entire Bible.  It has all the makings of a great play: a cruel villian, an oblivious king, a beautiful country-girl-turned-queen, a wise uncle, a herioc underdog, plot twists, comedic irony, and a happy ending.  Honestly, the stuff of Esther is as good as any royal intrigue found in Shakespeare’s finest plays.

For most of us, all we know about Esther is that she won King Ahasuerus’ beauty contest to become his new queen, and we might vaguely remember that she saved the Jews.  Let me briefly explain the plot…

The story opens with King Ahasuerus and his guests at a dinner party.  His Queen Vashti stubbornly resists his appeal for her to grace the party with her beauty, and in his drunken stupor he vanquishes Vashti from her royal position.  Immediately, like an episode of Persia’s Next Top Model, the king sends recruiters into his vast empire to gather all of the best and most beautiful young women for him to choose his next queen.  Esther, an orphaned Jew, charms his eye and wins the competition.

Behind the scenes, Esther’s uncle Mordecai faithfully serves the king and guides Esther.  He uncovers a plot by two eunuchs to assassinate the king (I know, eunuchs–who woulda thought!).  During the story, Haman, the villainous foe, is promoted to the right hand of the king.  Haman has it out for Mordecai because he will not bow before him.  In childish fury, he decides that not only Mordecai, but the entire Jewish people will be utterly destroyed for his indiscretion.

Haman hatches a plot to destroy the Jews.  He goes to the King, and using very vague language encourages the fatheaded King to decree that all Jews be annihilated because according to Haman, “Their laws are different from those of every other people, and they do not keep the king’s laws, so that it is not to the king’s profit to tolerate them.”  The king blindly obeys; he and Haman sit down to a quiet afternoon drink while the rest of the town is thrown into absolute confusion.

Mordecai calls upon Esther with the alarming news, and he encourages her to use her leverage as queen to influence the gullible buffoon she is married to so that the Jews might be saved.  Esther agrees.  Risking her life, she approaches the king uninvited but finds favor.  She invites him and Haman to a banquet, thinking she will broach the issue once the king is in good spirits and well-fed.

Meanwhile, Haman’s rage against Mordecai becomes so palpable that he cannot wait until the designated day to destroy him, but goes home and builds a 75-foot-tall gallows to hang Mordecai.  That night, the king asks for a bedtime story, and one of the royal officials reads to him from the chronicles of the kingdom–the best sleep aid available at the time.  By chance, the king is reminded of the time when Mordecai blew the whistle on the eunuch conspiracy against him.  He asks, “Has this man been rewarded?”  To his dismay, Mordecai wasn’t even sent a “thank-you” card.

The next day, as Haman huffs into the castle to ask to hang Mordecai on the gallows, the king invites him quickly in and asks, “What should be done to the man whom the king delights to honor?”  Straightening his robe and throwing back his shoulders in smug delight, Haman says, “For me–I mean, the man–whom the king delights to honor, let royal robes be placed on him and a royal crown set on his head, and let him be led on the king’s horse through the public square, and let an official declare his honor to everyone.”  In response, the king says, “That sounds great, Haman.  Everything you just said, go and do for Mordecai.”  The humiliation, irony, and comedic twist are so delicious you can taste it!

That evening, Esther’s party is in full swing.  On the second day of the festivities, Esther lets the cat out of the bag: someone is trying to kill her!  In fact a certain man is seeking to annihilate her entire people.  The king, still oblivious as all get out, cries, “Who is it!?”  She replies with accusing finger drawn, “A foe and enemy!  This wicked Haman!”  As the blood drains from Haman’s face, the king turns to him in rage.  It’s at this very moment that another one of the king’s mischievous eunuchs reminds the king about the lofty gallows constructed in Haaman’s backyard.  “Hang him on that!” the king exclaims.

In the ensuing drama, the Jews are granted the means to defend themselves from the onslaught of the empire, and in surprising fashion, these underdogs slaughtered 75,000 of their foes.  The story ends with a victory for the Jews, Esther at the king’s side, and Mordecai elevated to the second highest office in the kingdom!

But Where’s the Christ?

As a good Christ-centered reader of Scripture, your question as well as mine should be, “Where is Christ?”  The total absence of “God”, “the LORD”, and any other mentions of spiritual beings from this play might unnerve you.  However, several moments in particular betray that this story is actually all about Christ.

First, there is a pivotal moment in the drama where the king gives Haman the right to destroy the Jews.  These are his exact words, “And the king said to Haman, ‘The money is given to you, the people also, to do with them as it seems good to you.'”  This passive king betrays Israel into the hands of a wicked, scheming villain.  Haman’s purpose is “to destroy all the Jews.”  In King Ahasuerus’ words we hear an echo from the Passion narrative.  When Pilate, also a Gentile ruler, had the authority to protect the True Israel, he passively uttered those fateful words, “I am innocent of this man’s blood; see to it yourselves.” When each man had the power to vindicate Israel, he chose to differ to the wicked.

The character Haman himself is reminiscent of Judas Iscariot.  He was a scheming pretender who plotted against Mordecai, a faithful man of God.  His attempts to betray and destroy Mordecai, even receiving payment to accomplish his task, is very much like Judas.  At the conclusion of the narrative, we find him hanging from a gallows just like Judas.

Mordecai’s ride around the town square on the king’s horse just days before the proclaimed execution of all Israel has to remind us at least a little bit of Jesus’ triumphal entry into Jerusalem riding a lowly donkey.  In fact, Mordecai’s refusal to bow before Haman reminds us of Christ’s unwillingness to bow before Satan in the wilderness.  Though the infuriated Haman sought to destroy him, Mordecai was vindicated, and he rose to the right hand of the king–just as Jesus would do many years later.

The real kicker, however, lies with Mordecai.  After hearing the proclamation of the destruction of the Jewish nation, he still has hope.  Listen to what he tells Esther in 4:14, “For if you keep silent at this time, relief and deliverance will rise for the Jews from another place, but you and your father’s house will perish.  And who knows whether you have not come to the kingdom for such a time as this?”  Most of us know the second half of this verse, but the first part is the key.  Mordecai has faith that God will sustain and deliver the seed of Abraham.

That is what this entire drama is all about.  Satan and the Kingdom of Darkness are making another attempt to destroy the seed of Abraham before the Messiah has a chance to appear.  That is why Esther is all about Christ.  It is all about how God protected and delivered the seed of Abraham from attacks on all sides.  It is about how God used a woman like Esther and a man like Mordecai to overcome Satan’s vicious attempts to destroy God’s Plan of salvation.  On the cross, we see Satan’s last lunging effort to pierce through and destroy the True Seed of Abraham.  Even as he slew the Messiah, the blessing of Abraham finally came pouring forth from His open side.  Neither, Haman, Judas, or Satan could make God a liar.  His promise to bless all nations through the Messiah came true in Jesus Christ, and Esther is another exciting chapter about how God made it happen.

Here is the whole mosaic “Queen Esther Revealing Her True Identity” as pictured above.  You can see more of Lilian Broca’s work at lilianbroca.com 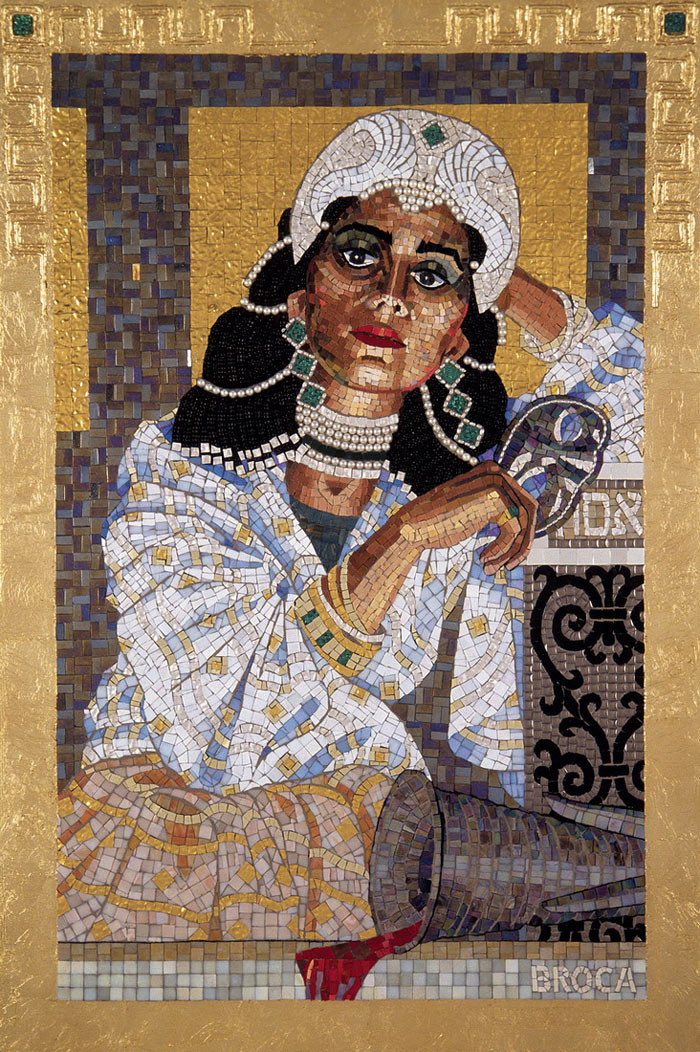 One thought on “Where’s the Christ in Esther?”