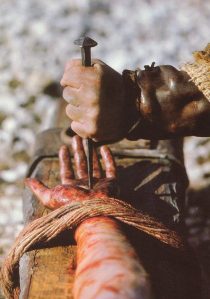 I’ve never seen Mel Gibson’s The Passion of the Christ.

Someone is probably on their way as I write to come revoke my ordination certificate, but nevertheless it’s true. The movie came out when I was in high school. I remember seeing the trailer for it and thinking of all the blood and gore that was sure to splatter across the R-rated screen and getting a little sick to my stomach. It felt like my Christian duty to attend the celebrated major studio production of the Passion narrative. But I was a squeamish kid, and the whole thing just made me feel uneasy. I still get that way–ask my wife. Just the thought of knives or sharp cut wounds…nope. Not even gonna go there.

I did see other more PG-rated Jesus movies and went to various Easter cantatas and dramatic re-enactments. Whether intentionally or not, these visual presentations of the Passion–and particularly the scene at the cross–always seemed to elicit a certain mixture of guilt and pity. As I watched Jesus hanging there on the screen or in the front of a sanctuary–sad eyes, bleeding, alone–it was like looking at a pitiful lost puppy.

I grew up Southern Baptist, where the Lord’s Supper was practiced rather infrequently. However, I always remember having a similar feeling during the time of reflection as the plates of bread and Welch’s were being passed throughout the large sanctuary. It was like I needed to feel sorry for Jesus that his body had to be torn for my sins. That I needed to feel sufficiently guilty for my law-breaking that forced him to be beaten and nailed to a cross and run through with a spear.

Ray Boltz had a song that was popular when I was a kid that went:

Does he still feel the nails
Every time I fail?
Does he hear the crowd cry
Crucify, again?

Am I causing him pain?
Then I know I’ve got to change
I just can’t bear the thought
Of hurting him

Yes. This encapsulates how I felt about the Cross. It’s a place where we need to pity Jesus. Look at his blood! Look at his tears! Look how lonely he is! He needs our help! If only I’d been there, I would have done something to help you, Jesus!  The song goes on to wonder: “But each time he forgives, what if he relives the agony he felt on that tree?”

For so many of us, the Jesus of the Cross is a man deserving of our utmost pity and sympathy. We’ve got the memes to prove it. When we revisit the Passion and remember his death and his pain, it serves as a motivation to quit sinning, because after all, what if it’s like he’s being crucified all over again every time we fail? What if he is forced to relive that pitiful scene every time we sin? What if it’s like he has to be re-sacrificed for the forgiveness of our sins?

Only this is absolutely wrong. Jesus doesn’t need our pity. We needed his. The purpose of the Passion is not to make us feel sorry for Jesus, but to show us to what great lengths God went to show his compassion for our pitiful souls. As Christ hung on the cross, bloody, pierced, his chest heaving for breath, here is what he managed to wheeze out: “Father, forgive them, for they know not what they do” (Luke 23:34). Even in his worst moment, when compared to our sorry state, enslaved to sin, prisoners of the Kingdom of Darkness, children of wrath, Jesus deemed us the pitiful lot. In fact, as he was being led to his execution, he turned to those following him and said, “Daughters of Jerusalem, do not weep for me, but weep for yourselves and for your children!” (Luke 23:28).

There is something to be said for how little time the Gospels actually spend on the gory details of the crucifixion. Matthew’s Gospel records it this way, “And when they had crucified him…” (Matthew 27:35). Mark’s is similarly succinct: “And they crucified him” (Mark 15:24). Luke says, “And when they came to the place of that is called The Skull, there they crucified him” (Luke 23:33). John uses the same language, but also records the piercing with the spear: “But one of the soldiers pierced his side with a spear, and at once there come out blood and water” (John 19:34).

Unlike The Passion, there is no lurid description of his marred appearance in the Gospels–though it certainly must have been. There is no close up of the nails going into his hands, not even a mention of the nails or the hammer! There is no prolonged description of the blood running down his back or an extended whipping scene like we normally picture. The Gospel writers are particularly reserved in the way they depict this grizzly execution. Even John’s inclusion of the spearing incident is to prove a point, “For these things took place that the Scripture might be fulfilled…’They will look on him whom they have pierced'” (John 19:37).

It seems the Gospel writers recorded particular details in the Passion narrative not to evoke sympathy or pity, but some other response.

What the Cross Demands.

Jesus does not need our sympathy or pity. When we look at the Cross, this is what it demands: our allegiance. There, at the top of the Cross, posted above Jesus’s head in all four Passion accounts is this sign: KING OF THE JEWS. When we look at the cross, we ought to tremble, not in sympathy, but in fearful reverence. What sort of King is able to endure such a horrific death at the hands of his enemies and yet rise again?

At the cross, God lifted up his Son before the whole world, suspended between Heaven and Earth, as the only King powerful enough to defeat Sin and Death. Here is what Paul sees when he looks at the Cross:

“And being found in human form, he humbled himself by becoming obedient to the point of death, even death on a cross. Therefore God has highly exalted him and bestowed on him the name that is above every name, so that at the name of Jesus every knee should bow, in heaven and on earth and under the earth, and every tongue confess that Jesus Christ is Lord, to the glory of God the Father.” (Philippians 2:8-11)

**Note: Just to be clear, Jesus does not “still feel the nails every time we fail.” Jesus does not relive the crucifixion. The writer of Hebrews is abundantly clear that unlike the sacrifices of the Old Testament (and the Catholic mass) that had to be offered week after week, “He has appeared once at the end of the ages to put away sin by the sacrifice of himself” (Hebrews 9:26). Neither Jesus nor the Father have to be reminded of his sacrifice. It is efficacious once and for all from the moment he brought his own blood into the heavenly places and presented it for the forgiveness of our sins.