I’m preaching on Christmas Eve in the morning in my “A Very Reformed Christmas” Advent series. My sermon, from Luke 2, will emphasize the fourth sola of the Reformation “Solus Christus” (Christ Alone), and I’m also exploring the life of John Huss as a part of the message.

In my studies, I came across this interesting piece of folklore about the night before the Reformation:

The evening before October 31, 1517, the Elector Frederick of Saxony had a dream which was recorded by his brother, Duke John.  The dream, in short, is about a monk who wrote on the church door of Wittenberg with a pen so large that it reached to Rome.  The more those in authority tried to break the pen, the stronger it became.  When asked how the pen got so strong, the monk replied “The pen belonged to an old goose of Bohemia, a hundred years old.”  The Elector was unsure exactly what the dream meant, but believed he had an interpretation which he thought may be accurate.  The very morning he shared his dream, Martin Luther was posting his theses.

So, since I’m preaching on Christmas Eve, I thought it only fitting to render this interesting story connecting Martin Luther with the legacy of John Huss using the cadence of “Twas the Night Before Christmas”. Here it is:

Twas the Night Before the Reformation

‘Twas the night before the Reformation, when all through the Church,
There’d be quite a stirring, on October thirty-first.
The Theses would be hung on the cathedral with care,
95 concerns of Luther soon would be there.
But Fredrick was nestled all snug in his bed;
While visions of a goose-feather danced in his head.
And he dreamed in his sleep, of a monk with a quill,
Who just scribbled out words on a door, if you will.
When over in Rome there arose such a clatter,
Fredrick looked in his dream to see what was the matter.
The end of the pen had flown like a flash,
Longer and longer cross Europe it stretched
‘Til the end of the quill was tickling Rome
And knocked the pope’s hat from off of his dome
When Fredrick’s wondering eyes did inquire,
Then the monk responded and said, “My dear sire,
This Hundred year-old feather so long and thick,
From a Bohemian Goose for a pen I did pick.” 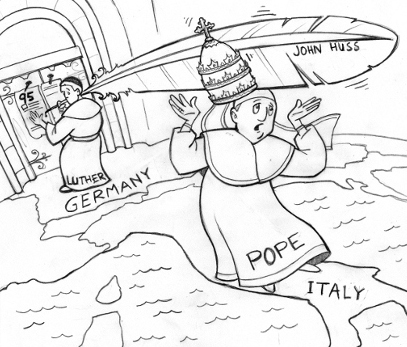