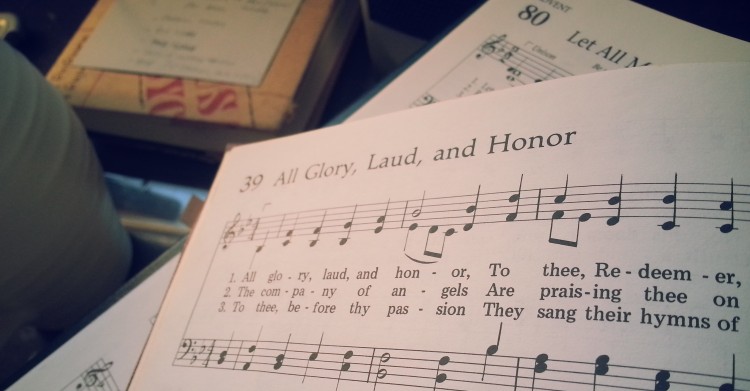 Think for a moment.  On average, how many Christians have sung the songs you typically sing in a Church gathering?  Hundreds? Thousands?  Hundreds of Thousands?

What if I told you that there are songs you could sing that have been enjoyed and used to praise our God for more than a millennium?  You heard me: 1,000 years.  Think about how many millions of believers could have the opportunity to cherish a song that old.  Think about the generation upon generation of Christians who have been edified and have glorified our God with a song of that vintage.

A song like that has had the chance to be translated into dozens of languages, be published in hundreds of hymnals, and used by thousands of churches for centuries.  Check out these four hymns.  They would be a great addition to your church’s congregational worship:

All Glory, Laud, and Honor

St. Theodulph (750-821) was a vital member of Charlesmagne’s court, bishop of Orleans, and was involved in much of the Carolingian efforts to reform the church.  It is believed this hymn was written while he was exiled by Louis the Pious, and he never regained his bishopric because he was poisoned on his return to Orleans!

Though this song is based upon Matthew 21, it’s a great one for any time of year:

All glory, laud, and honor to you, Redeemer, King,
to whom the lips of children made sweet hosannas ring.
You are the King of Israel and David’s royal Son,
now in the Lord’s name coming, the King and Blessed One.

The company of angels is praising you on high;
and we with all creation in chorus make reply.
The people of the Hebrews with palms before you went;
our praise and prayer and anthems before you we present.

To you before your passion they sang their hymns of praise;
to you, now high exalted, our melody we raise.
As you received their praises, accept the prayers we bring,
for you delight in goodness, O good and gracious King!

Of the Father’s Love Begotten

Aurelius Prudentius Clemens (348-405/413) was a Roman Christian poet who was born in Spain.  After a life spent in the court system, he retired to life as an ascetic.  His poems were influenced by heavy hitters like Tertullian and St. Ambrose.

This song reminds me of the Arian controversy that embroiled the Church just a generation before Prudentius, and I am certain the clarity of his verse is meant to present a Biblical understanding of how Christ’s deity and sonship fit together:

Of the Father’s love begotten, ere the worlds began to be,
he is Alpha and Omega; he the source, the ending he,
of the things that are, that have been, and that future years shall see,
evermore and evermore!

By his Word was all created; he commanded; it was done:
heaven and earth and depths of ocean, universe of three in one,
all that sees the moon’s soft shining, all that breathes beneath the sun,
evermore and evermore!

O, that birth forever blessed when the Virgin, full of grace,
by the Holy Ghost conceiving, bore the Savior of our race,
and the babe, the world’s Redeemer, first revealed his sacred face,
evermore and evermore!

This is he whom seers in old time chanted of with one accord,
whom the voices of the prophets promised in their faithful word.
Now he shines, the long-expected. Let creation praise its Lord,
evermore and evermore!

O ye heights of heaven, adore him. Angel hosts, his praises sing.
Powers, dominions, bow before him, and extol our God and King.
Let no tongue on earth be silent; every voice in concert ring,
evermore and evermore!

Christ, to thee with God the Father, and, O Holy Ghost, to thee,
hymn and chant and high thanksgiving and unwearied praises be.
Honor, glory, and dominion, and eternal victory,
evermore and evermore! Amen.

This hymn is an 8th century Latin hymn.  The above recording was the only legit one I could find on Spotify, but it is a satisfactory rendition.  I appreciate this hymn because it reminds us that there were redeemed believers even in the Catholic church of the early medieval age.  This song drips with Pauline doctrine:

O Christ, our hope, our heart’s desire,
redemption’s only spring,
Creator of the world art thou,
its Savior and its King.

How vast the mercy and the love
which laid our sins on thee,
and led thee to a cruel death
to set thy people free.

But now the bands of death are burst,
the ransom has been paid;
and thou art on thy Father’s throne,
in glorious robes arrayed.

O Christ, be thou our lasting joy,
our ever great reward;
our only glory may it be
to glory in the Lord!

This hymn is said to be taken from the Liturgy of St. James from the 5th century.  I love its minor key feel, and the music’s ominous melody inspires a proper sense of awe at the entering of the Word of God into the realm of mortal men:

Let all mortal flesh keep silence,
and with fear and trembling stand;
ponder nothing earthly minded,
for with blessing in his hand
Christ our God to earth descendeth,
our full homage to demand.

King of kings, yet born of Mary,
as of old on earth he stood,
Lord of lords, in human vesture,
in the body and the blood,
he will give to all the faithful
his own self for heavenly food.

Rank on rank the host of heaven
spreads its vanguard on the way,
as the Light of light descendeth
from the realms of endless day,
that the powers of hell may vanish
as the shadows clear away.

At his feet the six-winged seraph,
cherubim, with sleepless eye,
veil their faces to the presence,
as with ceaseless voice they cry,
“Alleluia, alleluia,
alleluia, Lord most high!”

Give these hymns a shot.  You’re gonna like the way they inspire worship–I guarantee it.