Allow me to explain.  For years the word “hallelujah” has been a mainstay of the Christianese Dictionary, but it has carried about as much meaning as an armless man does a bundle of sticks.  We all know it is a distinctly religious word, but for most Christians it is utterly devoid of meaning.

I remember when I spent a summer in Africa, we attended a church that used “hallelujah” as a Christianized version of the word “hello”.  When I tried to explain to the church that the word “hallelujah” actually means “Praise the Lord”, they looked at me funny, like I was speaking a foreign language (come to think of it, I was talking to them through a translator). 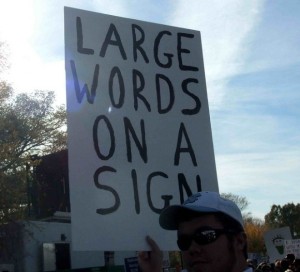 Whether speaking Chichewa or English, Christians don’t know what the word “hallelujah” means, nor do they mean anything by it. Therein lies the conundrum.  Why on earth do we still use the word “hallelujah” in our worship songs?  That’s where many of our modern songwriters have had the guts that most of us lack.  They have stopped using the religious sounding word “hallelujah”, and they have substituted the similarly hollow but much more colloquial word “Whoa!”

I have to give it to these guys.  At least practice and theology are sharing an honest handshake. Music writers have caught on to the fact that hallelujah is one of the last meaningless vestiges of traditional worship, and they have replaced it with “whoa”–an equivalently meaningless word.  Both express no rational truth in our minds.

If our corporate singing were a game of Chicken, then theology flinched and practice won out.  Rather than talking about the importance of our songs communicating actual spiritual truth, we have decided to conform our practice to our truthless theology.  We have nothing to say about God or to say to God, so why use words at all?  “Whoa” shall suffice.  Rather than spending time learning about the true meaning of a word like “hallelujah” or “justified” or “substitution” so that we can sing these words from the heart, we have rubbed them out of the worship book (or from the projector screen), and replaced them with words that communicate our meaningless worship to a God that we don’t really know.

How can we love God if we don’t know what he has done for us?  How can God know that we love him for sending his Son to die in our place on the cross so that we might find justification before his throne, being changed from convicted criminals to beloved sons of God, if we don’t communicate these ideas with words that actually contain meaning?

I believe we are selling ourselves short.  Our songs no longer give us the ability to communicate our true love for God.  Christian, do you want to sing “whoa” 13 times to your God–or would you rather sing words that describe the beauty of God’s creation, or the sorrow of Christ’s death for sinners, or the victory of his resurrection from the grave, or perhaps the glorious grace of the Holy Spirit that works to unite the body of Christ?

So, “Whoa” is the new “Hallelujah”.  Does that bother you?  Or are you glad that worship leaders have finally helped us find the right vocabulary to inspire sentimental emotionalism without the encumbrance of worshipful meaning?  At least we are being honest, and once everything is on the table we can make an honest choice.

Wouldn’t you like to learn what a word like “hallelujah” means, so that you can sing it from a heart of intelligent faith and love?  Perhaps you are satisfied with abandoning these archaic bible words in favor of the bland and common.  However, I believe that the better we come to know God and what he has done for us, the more our hearts will long for better words to express our love for him.